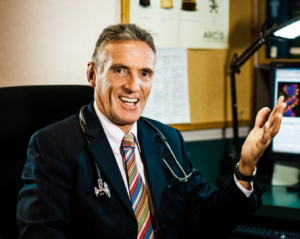 Stephen B. Shrewsbury is a
physician whose 30-year career has taken him from the intimate world of English family practice to the cutting edge of global drug development where physician scientists are creating therapeutics that will “patch” our disease-causing genes.

For 20 years he has worked for a series of pharmaceutical companies, starting with 9 years at GlaxoSmithKline, initially in the UK and then in the US, before moving to Chiron Corporation.

After Chief Medical Officer roles with MAP Pharmaceuticals and then Adamas Pharmaceuticals, he spent nearly three years as Chief Medical Officer of Sarepta Therapeutics, a company focused on the development of drugs that will precisely and effectively correct some of the mistakes found in our genes. These innovative molecules, know as DNA-based oligomers (or oligonucleotides), will finally offer physicians tools to address some of the most vexing medical conditions such as cancer, inherited diseases and lethal infections. In 2012, he became acting Chief Medical Officer to LifeSplice Pharma, another oligonucleotide company with a candidate drug for ALS and more in early development. He has invested in this company, underlining his enthusiasm for this exciting new breed of drug.

In 2013, he joined Aquinox Pharmaceuticals as Senior Vice President and Chief Medical Officer.

Since 2009, he has served on the Oligonucleotide Safety Working Group (OSWG) – an international working group comprised of industry and regulatory authority members devoted to the safe development of oligonucleotides.

In 2011, he established Shrewd Consulting LLC to support and advise biotechnology and biopharmaceutical companies seeking to develop small molecule and oligonucleotide drugs, but he is not accepting new clients while busy with two exciting programs at Aquinox Pharmaceuticals.

Always passionate about educating others, in 2013, he established BioXpertz, (check out bioxpertz.com) with a colleague, launching an innovative, interactive, inexpensive, web-based educational program for busy pharmaceutical and biotechnology employees.

While based in Cupertino, California, at the southern end of the San Francisco Bay Area, I have been able to support projects in this biotechnology rich area – or elsewhere in the world with the help of global communications and good transport. In 2013 I will be moving to Vancouver, British Columbia, to lead some exciting clinical programs at Aquinox Pharmaceuticals.